My heart fluttered with excitement as the tuk tuk pulled up to the gate of Animal Rescue Cambodia. This was it. The moment myself and our team had been preparing for, for months. I could hardly believe it was happening. With each step I took toward the shelter entrance, a new fleeting thought came to mind. What are these dogs like now after months of recovery? How will they react to strangers? What parts of their past still linger?

With a deep breath and exchanged smiles, my team and I opened the door. Instantly, we heard the welcome committee and saw the faces of Sopol and Quentin run up to the gate, tails wagging, heads bobbing left and right. The shelter staff let us in and Quentin started jumping in circles, excited at the prospect of new people to give him attention. Sopol backed away slightly, sniffed, then closed his eyes and put his head under my hand to be pet. His fur was thicker and softer than I imagined and when I felt him lick my palm my eyes burned with joy and thankfulness that released in one slow trickle down my cheek. To see these dogs safe and in person was indescribable. I felt a fierce instinct to protect them, and a sadness as I thought back to all I know they have experienced in their young lives.

At the time of their initial rescue, Sopol had been found in a cage with Neary; two dogs had been roughly taken out of their same cage right in front of them and brutally slaughtered. Quentin had once been owned but was sold into the trade; he was found tied up outside a dog meat restaurant where he was going to be hung from a tree later that day. The puppies Bates, Bene, and Nicky were rescued from a cage just minutes before they were going to be drowned in a dunk tank.

From meeting these first two dogs, you would never know the horrors they had seen. They absolutely loved people and wanted all the attention in the world. Each had good reason to fear and be distrusting of humans, but their resiliency and desire to be loved was truly moving. It was very apparent that our team of dedicated animal experts at FOUR PAWS and our partner Animal Rescue Cambodia had given them the compassion and rehabilitation they needed to regain their confidence, courage, and ability to love.

Myself and the team were introduced to Bates, Bene and Nicky one by one. Each puppy was equally loving and full of lots of energy. Only Neary proved to be more cautious of us. She laid down in a corner, making sure she could see us and was protected on all sides but whenever the shelter staff passed by, she stood and wagged her tail, asking to be pet.

Our team quickly got to work. We reviewed paperwork and transport documents for the dogs, prepped their travel crates, and exercised the dogs before the long journey to the United States. We introduced each one of the dogs to toys and blankets we brought. Bene and Bates had fun playing tug of war with one another. And Sopol, curious and smart as he is, caught on to fetch within the first 60 seconds of us playing together; he also leaped high into the air, pounced on toys we threw on the ground to him, and rolled on his back with them in his mouth.

To help each dog cool down from the Cambodian heat, we gave them baths. Only one of the puppies, Bates, willingly tolerated bath time and treated it like spa time. He loved getting wet and being pet, so much so, that he kept trying to steal bath time from his pal Bene!

As I observed each dog, I noticed that, to me, they acted like any dog I had ever played with at a friends house or seen play at the dog park. At first glance, you would never know there was a point in their lives they never had these opportunities… just a death sentence.

On the day of departure back to the U.S., we gave each dog a collar and harness. One by one the staff called each dog into their own crate and they walked in, uninhibited – a huge feat! To allow this to happen, staff crate trained each of the dogs to help them feel comfortable and safe; they also received collar, harness, and leash training as well. Doing this was important to reduce stress on the 24+ hour journey and make them comfortable with new situations they’d be exposed to.

We loaded the crates into our transport van and made our way to the airport at Phnom Penh. When we arrived we checked in each dog and brought them through security. This was the last time any of these dogs would ever be in Cambodia again.

Although long, the journey went smoothly and our arrival to the U.S. was uneventful – in a good way. At the Boston Logan airport, I checked on each dog in their crates. Nicky and Bates were eager to give kisses through the metal doors and Bene moved around in circles so I could pet different parts of her and scratch her back. The U.S. FOUR PAWS team met us at arrivals and from there we again loaded the dogs up, one final time, to transport them to our shelter partner, Connect A Pet New England, in New Hampshire. It was here we knew each dog could best recover from the long trip – away from the hustle and bustle of the city life they were used to and enjoy the New England mountains and crisp fall air.

Four days later, my heart again raced with excitement. This time for a different reason. When I walked up to the door of our New Hampshire shelter partner, I knew this would probably be the last time I saw these six adorable dogs. They were waiting to be brought to their foster homes later that day and I was eager to see how they were adjusting. As I opened the door to Connect A Pet and walked inside, my face burst into a smile as I was greeted by synchronized wagging tails.

Bates, Bene, Nicky, Quentin, Sopol, and Neary each left behind the lives they knew and stepped out into a much different world. It was the first time they had ever experienced a season and boy do they LOVE playing in the fall leaves and going for walks. Now they enjoy playing at their foster parents’ homes and I’ve been just been told that four dogs have already been adopted! Sopol, Neary, Nicky and Bates now have loving homes.  My heart is so full knowing these rescued dogs will make a wonderful additions to new families.

Thanks to the support of FOUR PAWS’ compassionate animal lovers, and dedicated supporters, each of these dogs have not only escaped the brutal dog meat trade, they’ve been given a new life they could have never imagined. Thank you to everyone who advocates for an end to this trade and know that the work of FOUR PAWS is never done: We continue to advocate for more lives to be saved and for this barbaric trade to end. 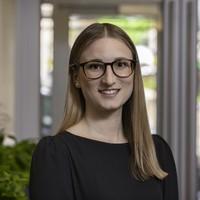 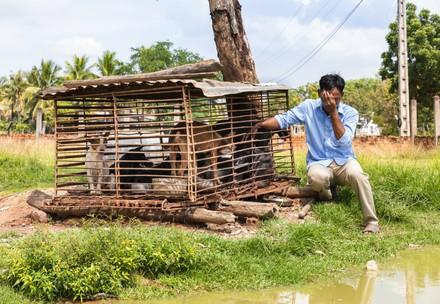 Denise Zöhrer looks where others turn away 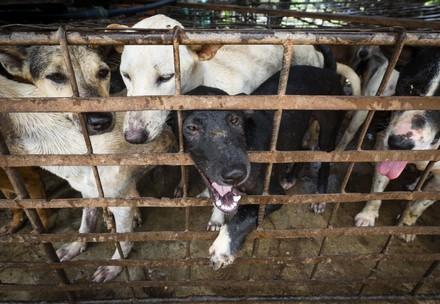 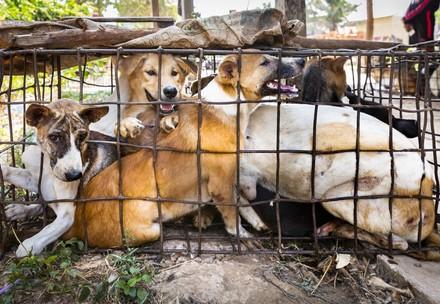 What you should know!