Donate
The Dog and Cat Meat TradeFinding HopeRescue of Nanna

Most people know Siem Reap, Cambodia for the breath-taking temples of Angkor Wat. Every year millions of tourists flock to this historic city, but when our team hit the ground it wasn’t to visit these awe-inspiring sites, but rather to investigate the dark secret that lies in the shadows of the historic temples: the cruel and horrific dog meat trade. Just minutes away from this famous tourist destination lie a handful of shocking holding areas where hundreds of dogs are kept every day to be trafficked to slaughterhouses across the country.

Once on the ground, our team headed for the outskirts of Siem Reap province. After a long and bumpy ride through red dusty roads, we arrived at a village occupied exclusively by dog catchers – or more correctly – dog snatchers. As we jumped out of the tuk-tuk, we knew we had arrived at the right place – the putrid smell of hundreds of dogs being kept in overcrowded cages hit our nostrils. If the strong odour of urine and wet dog was not enough to convince us, the crying, wimpering, and howling of the terrified animals quickly confirmed it.

After a few minutes of trekking down a small path we saw what we were looking for – rusty cages upon cages raised off the ground, all of them holding 10-30 dogs crammed inside. Many of the dogs showed clear signs of injury, open wounds and skin infections.. Many of the dogs were desperate for human attention - signs of their former lives as pets before they were stolen for the trade.. One such dog was Nanna: A small puppy, about four months old, who every time we walked by her cage would lay down on her side, stretch her small paws as far out through the spacing in the cage as she could, and then give a classic puppy whine until one of our team members would go over and give her attention. She would return the favour with a lot of licks, while her tail wagged in the otherwise depressing cage.

As we asked around to get more information from the villagers we learned that the owner of this particular holding area was not around. But we discovered a minivan that had been converted into a dog transport vehicle. The rather unsuspecting minivan was retrofitted with a large cage inside, so big that it could be filled with 80-100 dogs, depending on their size. This minivan was used to deliver live dogs to slaughterhouses 5-7 hours away, every morning. Nanna was scheduled to leave on the next morning’s delivery.

The purpose of our visit to this holding area was simple – to document and investigate the trafficking of dogs from Siem Reap to help us end the trade. We had to leave this place to continue our investigation, but as the day progressed, we couldn’t help but think of the sweet puppy who reached out to us. So much in fact that we knew we had to return. While heartbreaking for the other dogs on site who we were unable to rescue, at least we could rescue this small puppy from her certain fate.

After some negotiation, we were able to secure the release of Nanna. And not a minute too soon. When we arrived, we were initially shocked to see all 80-100 dogs stuffed into the back of the minivan in their cages, while we could not find Nanna anywhere! Luckily it turned out that Nanna, , had been placed in a cage by herself, and when she saw us approaching the cage, her entire body almost could not keep up with her tail-wagging – she clearly wanted to get out of there, and we wanted to take her with us , so after only a couple of minutes in the village, we were back in the tuk-tuk, with a small puppy on our laps! Initially Nanna was clearly in shock and had to take in her newfound freedom, but as her nervous shaking subsided and the licking of her rescuers increased, we started seeing her real personality; tongue hanging in the wind as the tuk-tuk speeded back towards town, jumping, licking, rolling around, as you would expect any normal puppy to do. Nanna started to recover during the 6 hour journey back to Phnom Penh with the team, where she received a full medical examination. And for Nana there was only good news. Our photographer on the investigation who lives in Cambodia offered to adopt Nana and give her the loving home and family she never had.

Lucky Nanna: Our photographer fell head over heels in love with her and chose to adopt her. Nanna now lives a wonderful life in the bustling city of Phnom Penh with two other canine siblings to keep her company. 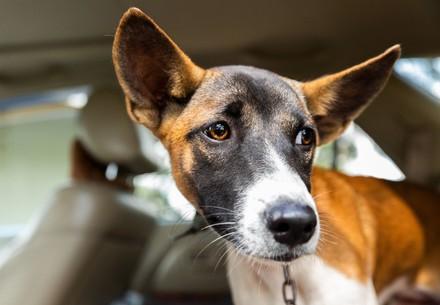 Some dogs are luckier than others 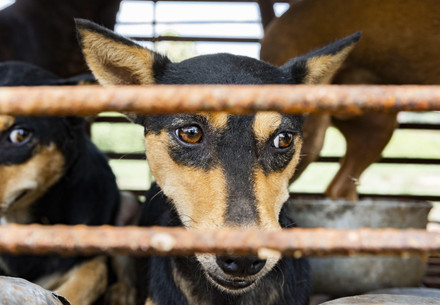 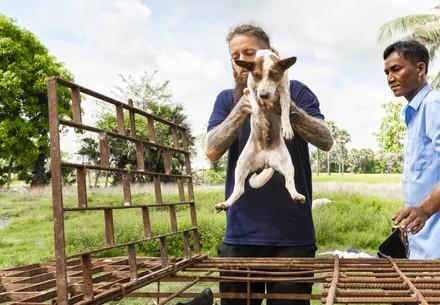